There are tons of articles out there on the great wide internet that talk about how to scale your application with Docker. Many of these articles talk about small docker environments, or quickly jump into how to massively scale it (With k8s, swarm, or otherwise).

But what about me? I want to host something for my personal sites and projects without investing the time and energy into a full blown cluster. Today, I'll be sharing my experience with managing a small docker swarm.

One of the easiest ways you can get going is to spin up a virtual machine (locally or on the cloud) and install docker on it. That doesn't handle key authentication for you, and certainly doesn't allow you to scale horizontally without repeating yourself and managing it manually, but it is an easy way to get started.

Personally, besides when I was learning, I skipped right over this.

If you don't know about docker swarm yet, I recommend it. Docker swarm gives you the power of hosting horizontally scaling services, without the need to worry about the networking that connects the containers. I find it to be a lot lighter weight than setting up k8s (or otherwise), but gives you scaling power. This is what I'll be focusing on.

My goal was to set up a small swarm that I could scale, but have minimal management overhead around security, and the ingress point.

Setting up a small swarm 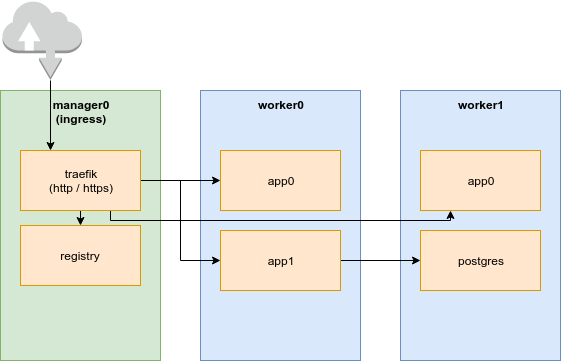 Okay, first thing's first... you'll need some machines. I'm personally a fan of Ramnode, but any provider that works with docker would be fine (DigitalOcean, vultr, etc). Make sure you buy one of their KVM instances (you need to be running your own kernel to support docker).

If you're not ready to make the leap, you can spin up a few linux instances locally via Virtualbox (I'll show you how below).

To connect docker-machine to your cloud instances via SSH, run the following on each machine:

For the sake of this example, I will have two nodes. The manager called manager0 and a worker called worker0.

If you're using virtualbox, first, make sure you have it installed.

Then, spin up at least two virtualbox instances with docker-machine. One will be the swarm manager, the other the worker node.

Once you have docker set up and managed by docker-machine, you'll need to put them in swarm-mode.

On your manager node only, do the following:

This command will output another command to be run on each worker. If for some reason you didn't save it, you can get it again by running docker swarm join-token.

On each worker node, do the following:

Congrats, you have a small swarm cluster! It doesn't do much by itself, so it's time to install some services.

For the rest of these steps, we'll want to make sure your local docker command is pointing to the manager. We can run the following set that up:

If you don't see an error, you're good to go!

The two fundamental services we'll need for hosting websites on your swarm are the docker registry, and a reverse proxy to serve the sites with a domain name. I use traefik. 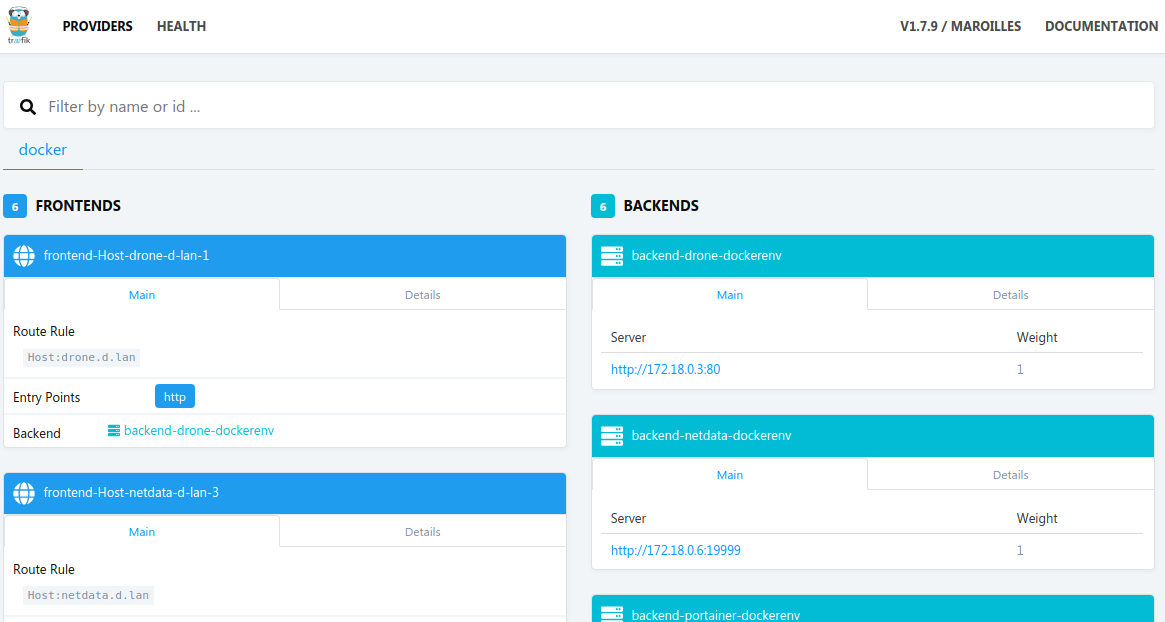 The below configuration accomplishes the following:

NOTE: My yaml stack is parameterized, so make sure to set parameters when running it. You should be able to run it directly as follows (assuming you copy-paste it to common.yaml). It also assumes you have a wildcard domain pointed to your swarm. Eg, for zdyn.net, *.swarm.zdyn.net will point to the manager node.

Once you deploy, you'll be able to access the following (Replace with your domain):

Managing the Swarm with Portainer (Optional)

I also run an instance of portainer on my swarm, which gives me a UI view of what is running where. This is also a good example about how to spin up a separate stack and have it communicate with the network on the common stack to gain the advantage of the ingress point (traefik).

Similarly to above, this one is also parameterized:

Once installed, go to https://portainer.example.com, and set up your admin account.

Once you have the common infrastructure set up, you'll probably want to deploy an application of your own.

I won't cover how to make a Dockerfile here, for this case, let's assume you have one called blog by running docker build -t blog .

Pushing the image to your registry

First thing is first, we need to push it to your registry. You are more than welcome to push to dockerhub, but we set up our own to keep it private.

Great! Now it should be on the registry, which you can check by opening up the UI.

Now it's time to make your stack and connect it to traefik.

And we'll deploy it like we did the other ones:

That's it! Now you'll be able to get to https://blog.example.com

If you want your blog behind a better domain, you can simply change the host rule in the config. Make sure your domain points to the swam manager node.

One of the things you might notice is that, unlike a traditional setup, none of the stacks expose anything on any ports besides traefik. This is because we all use internal overlay networking to expose services via traefik. We do this for two reasons.

We don't talk in this article much about keeping things up to date. The private overlay network (and its encryption) protect us to an extent, but docker explicitely says we shouldn't rely on containerization as a security method.

It's on you to make sure to patch docker, ssh, and any other services in a timely manner.

I ultimately did this for a few reasons.. I wanted to be scalable, but also, it's just fun to play with docker. This blog, amongst other sites I run, are on this swarm now, and I'm able to quickly deploy and iterate on them in a way that is consistent and repeatable.

In a future post, I will be sure to talk about my CI/CD setup, where I recently switched away from Jenkins to Drone CI

If you have any questions, feel free to leave them below and I'll do my best to answer.

You can read more on the docker series here

Another site of Code